In 2018, the galley established the "m Space" for online display and retail. It collects and collates the artists’ creative philosophies as well as the contexts and details of their works, allowing prospective collectors to purchase them without doubting the authenticity of their origins.

The first two series in the m space is "Monroe Series" and "Taipei Series."

Comprising a total of 39 pieces of work, the "Monroe Series" included Tan Kai-I’s works presented at the "Art Taipei 2012" and two of his solo exhibitions, respectively titled "Strip off, Marilyn Monroe (2012)" and "Monroe in 6 min 30 sec (2013)." Marilyn Monroe (1926-1962) was the most celebrated exotic beauty in the 20th century. Integrating his real-life experience with Monroe as the creative symbol, Tan created a riveting painting series that brought a humorous touch of tragedy to the viewers.

The "Taipei Series" was an art project initiated in 2012 and finished in 2016 by Shiau-Peng Chen. All the pieces of this series were presented at two of the artist’s solo exhibitions, respectively titled "The Integral Map II: My Taipei" and "The Integral Map III: My Taipei - The Sequel." Comprising a total of 23 pieces of work, the Taipei Series was divided into 5 sub-series, including My Universities, My Galleries, My Ways, My Parties and Taipei 543.

[My Galleries I - All the Same? (Map of Galleries / Depicting Galleries)] 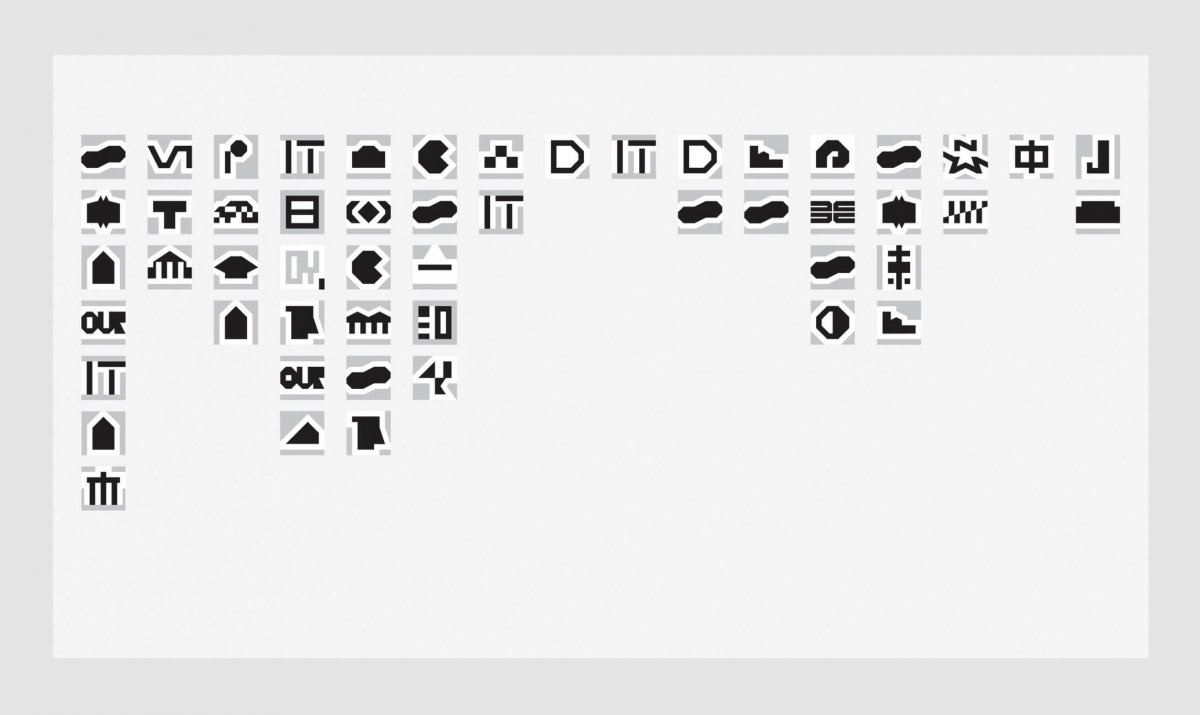 The composition of this piece was chronologically organized to list all the Taipei-based galleries that had hosted Chen’s solo exhibitions, insofar as to become the index to the whole sub-series in general and to the symbols as well as the galleries these symbols represent in particular. This piece was nothing short of Chen’s graphic résumé, and a map that charted the course of her career as well. Her purpose of listing these galleries was not so much to showcase her superb ability in producing exhibitions as to demonstrate, based her personal experience, the power relationships between host galleries and artists whose backgrounds are similar to hers. For the artist, drawing the maps of galleries was little more than reclaiming her power over these galleries, and how she drew these maps was the key to achieving this goal.

→go to m Works, Taipei Series 06 [My Galleries I - All the Same? (Map of Galleries / Depicting Galleries)] 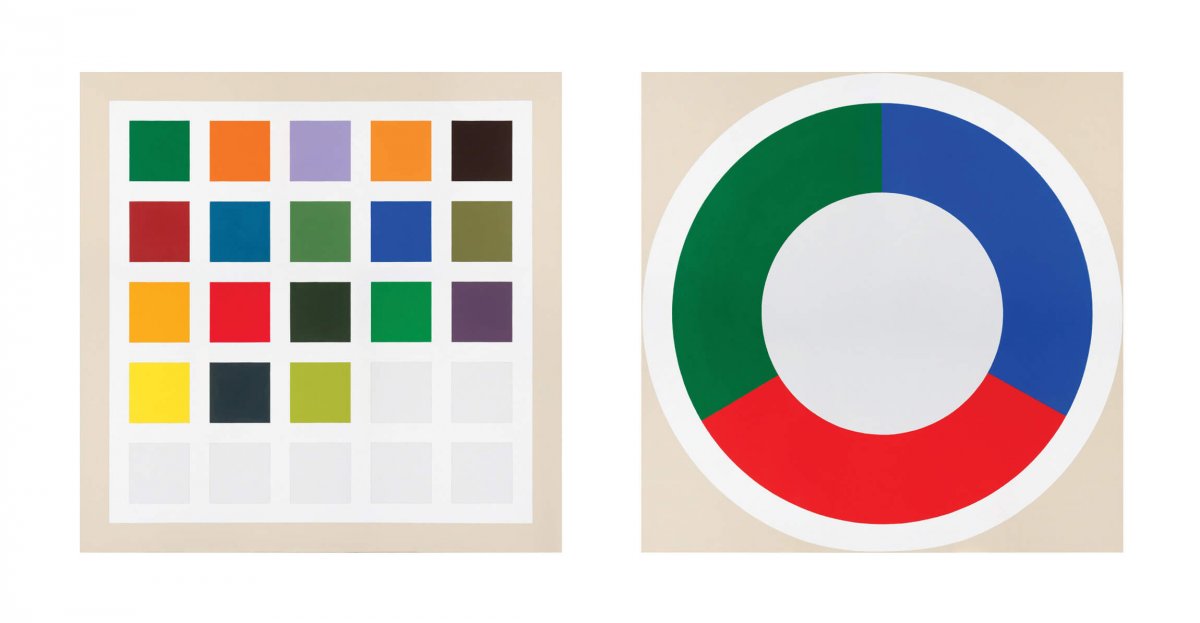 This set of works was also inspired by the 2016 general election. Chen pored over the logos of the eighteen political parties running for the election, after which she chose their respective symbolic colors and painted them on the canvas one by one, making this piece a dead ringer for a swatch book. As far as the artist was concerned, the body of Taiwanese public opinion on politics would inevitably grow, so she left some blank checks besides the eighteen colored ones to intimate that more political parties would join election campaigns in the future. The composition of the other piece took on the form of a color wheel in blue, green and red colors, indicating that, in general, the Chinese Nationalist Party, the Democratic Progressive Party, and the China factor remained the decisive powers to the election of members of the ninth Legislative Yuan in terms of the party-list proportional representation.

The artist derived the set title, namely Palette & Chameleon, from the original functions of color chart and color wheel as a scientific palette for artists to carry out color projects of all stripes. In this set of works, the artist turned them into a political palette, and evoked the metaphor of chameleon to satirize those Taiwanese politicians who know which side their bread is buttered and take political actions according not so much to any philosophy or ideal as to their selfish interests.

With this set of works, Chen intended to describe the political situations she observed in Taiwan, particularly the phenomena occurred in the 2016 general election. Based on three commonly seen green marks and the infinite cyclical structure of the Möbius band, the three pieces of this set respectively insinuated three situations of Taiwanese politics. The one with slotted and tabbed joint in blue and green colors symbolized the bitter wrangle between the two major political parties. The triangle in blue, green and red colors implied that China is a force to be reckoned with as much as the two major political parties in Taiwan. The square comprising blue, green, orange and yellow colors illustrated that, in addition to the two major political parties, third parties such as the pro-unification People First Party and the emerging center-left New Power Party also played a role in the 2016 general election. 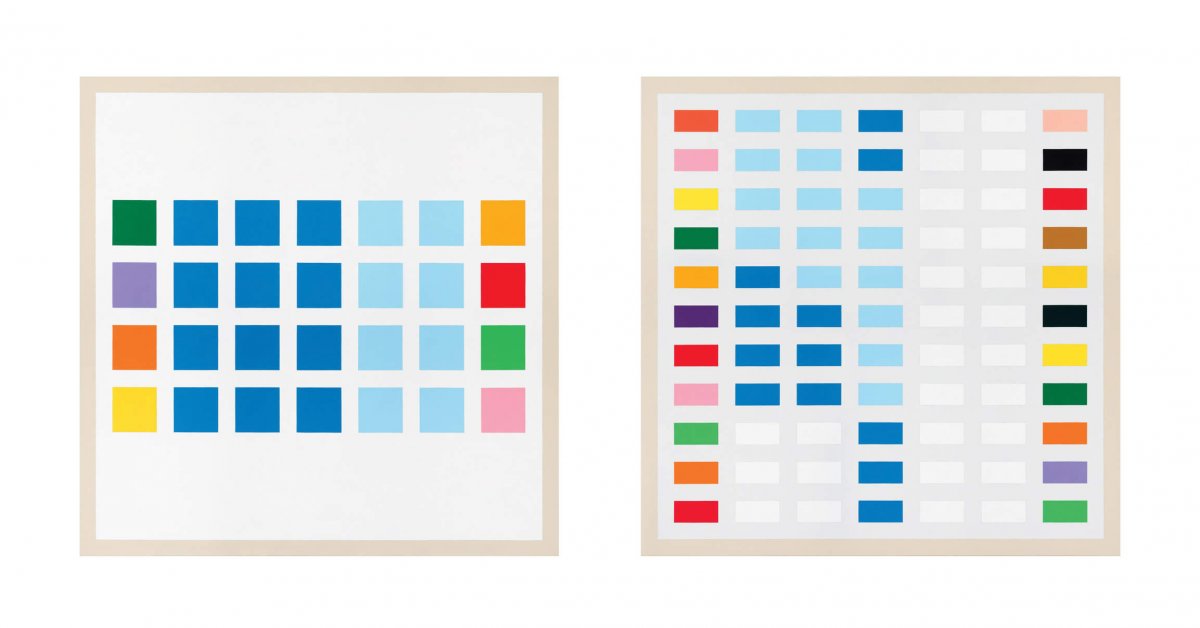 This set of works illustrated Chen’s temporal experience she underwent when teaching in the college. The artist combined the Gregorian calendar date format with that of her weekly course schedule. The dates on which she has classes to teach were marked in midnight blue, and those she stays in the university yet has no class to teach in aqua blue. Weekends were manifested in iridescent colors. In this set of works, colors were apparently used to denote different psychological states. Midnight blue did savor of Monday blues, while the bright colors bespoke happy weekends. On the one hand, the arrays of color blocks on the compositions allegorized Chen’s lifestyle as a programmed machine, as if she must clock in and out every day. On the other hand, the swatch book-like arrangement of same-sized color blocks created a visual effect of circulation, giving the viewers the illusion of time elapsing.

[My Ways I - Method of Survival (Activity - The Broad Sense)] 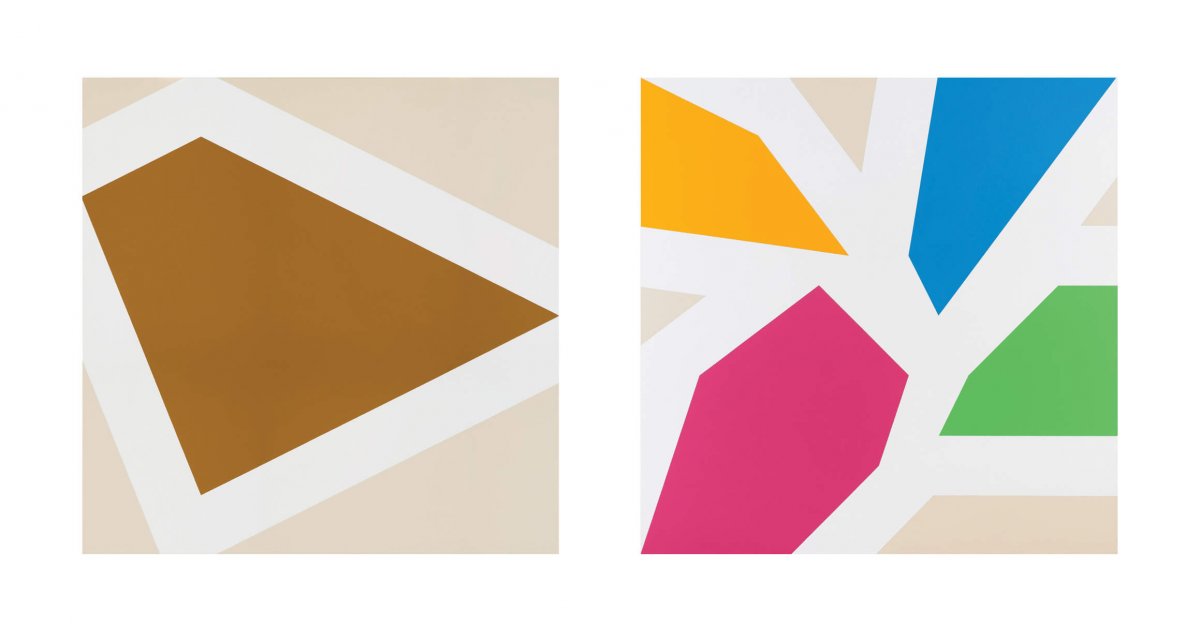 Chen usually roams around Taipei by the MRT. Her sphere of activity is thus within the reach of the MRT lines. She always has the EasyCard with her. The card is tantamount to a key, with which the artist can unlock the four corners of this city. She drew an enlarged EastCard logo that sprawled over the edges of the canvas, making it nothing short of a flower in full bloom. To provide this piece with a company, Chen drew another painting that symbolized the area of Taipei, indicating the general equivalence between the two concepts. Chen’s flower of art appears and blooms mainly because of the fertile soil of Taipei.

→go to m Works, Taipei Series 15 [My Ways I - Method of Survival (Activity - The Broad Sense)] 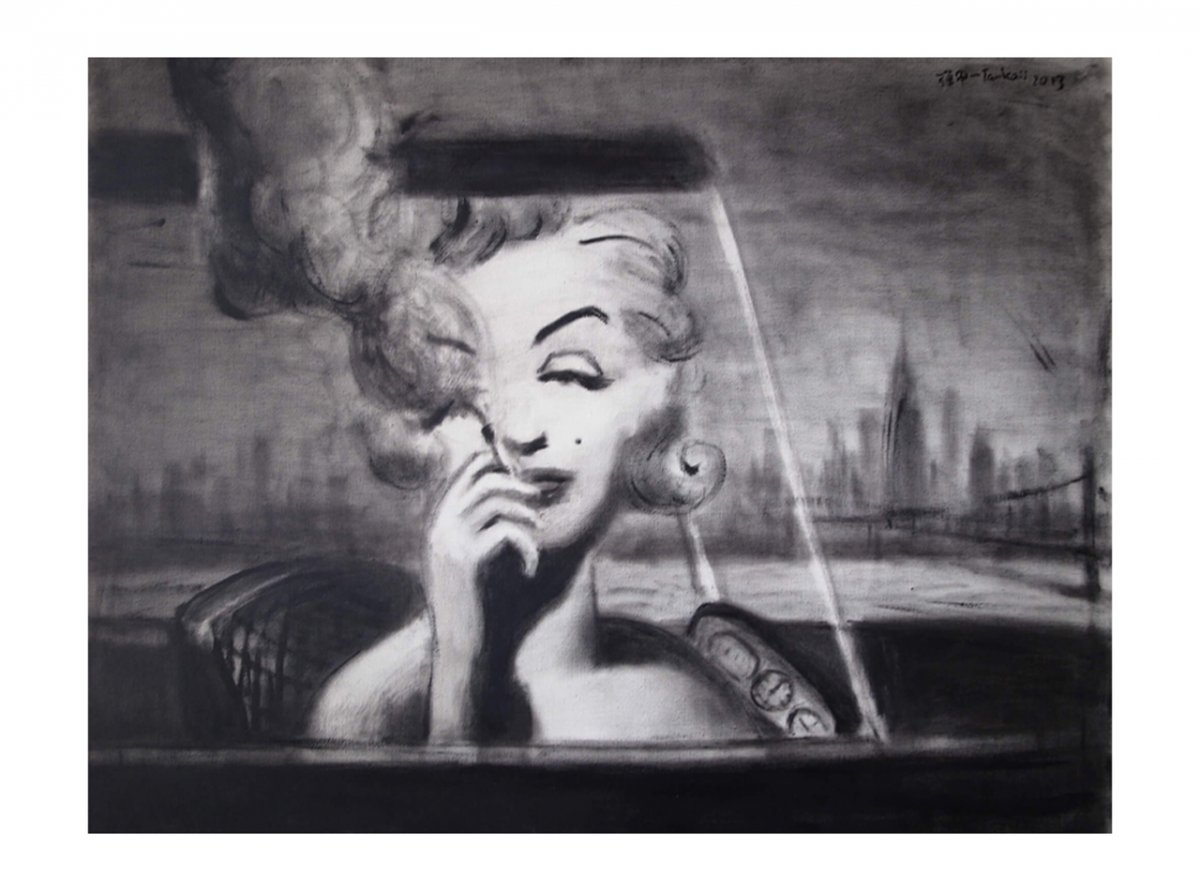 [Marilyn Monroe Goes to New York depicts] Monroe driving to New York, a city all too familiar to her. The shades of grey reflect her mood. The familiar landscape looks so cold and unapproachable. Looking out of the side window at the cityscape and puffing on a cigarette, she is speechless, deep in thought… 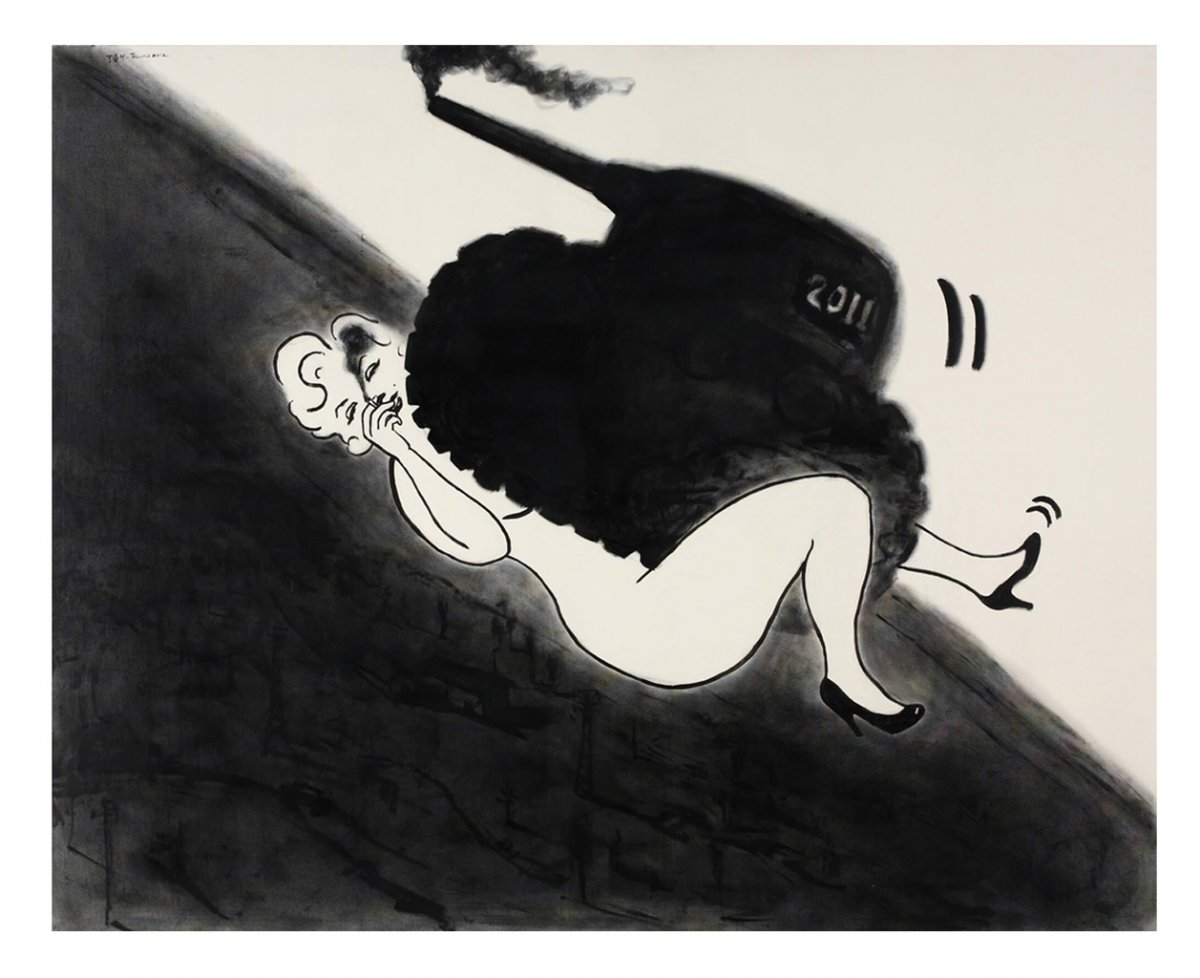 [Marilyn Monroe & Tank] depicts a plump tank relentlessly running over Monroe who lies on a slope. The smoking cannon implies that the tank has just fired shells. The comic symbol next to the tank also appears above Monroe’s tiptoe, showing the sense of shaking in a humorous fashion.

The number on the tank represents the year when this painting was created. Monroe’s relaxed expression seems to tell us that she is relishing being caressed by a soft sponge rather than run over by a heavy tank. The composition evokes associations of sex, isn’t it?

[Marilyn Monroe with the Jelly] 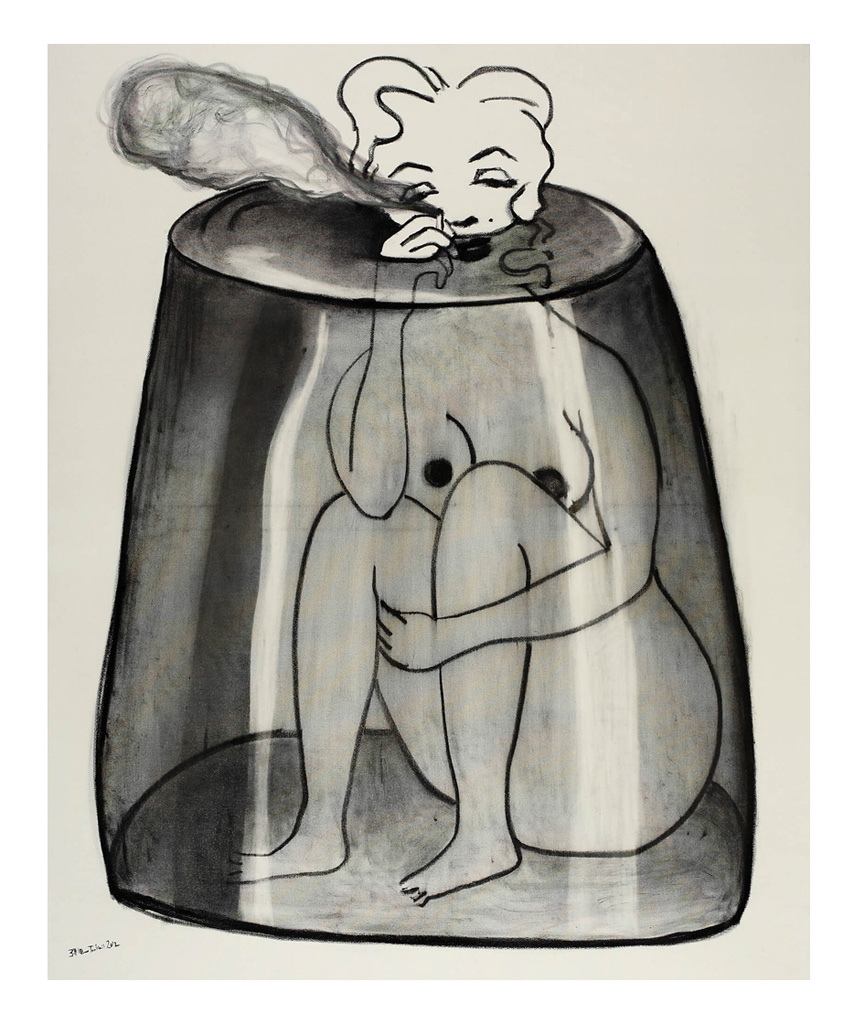 [Marilyn Monroe with the Jelly] shows that Monroe exposes the upper half of her face outside the jelly, puffing on a cigarette and enjoying the tactile quality of the wobbly jelly. Tan created this work with simple, restrained yet deft strokes, bringing a subtle touch of childlike innocence and making the scene pretty intriguing.

[Happy Birthday to you] 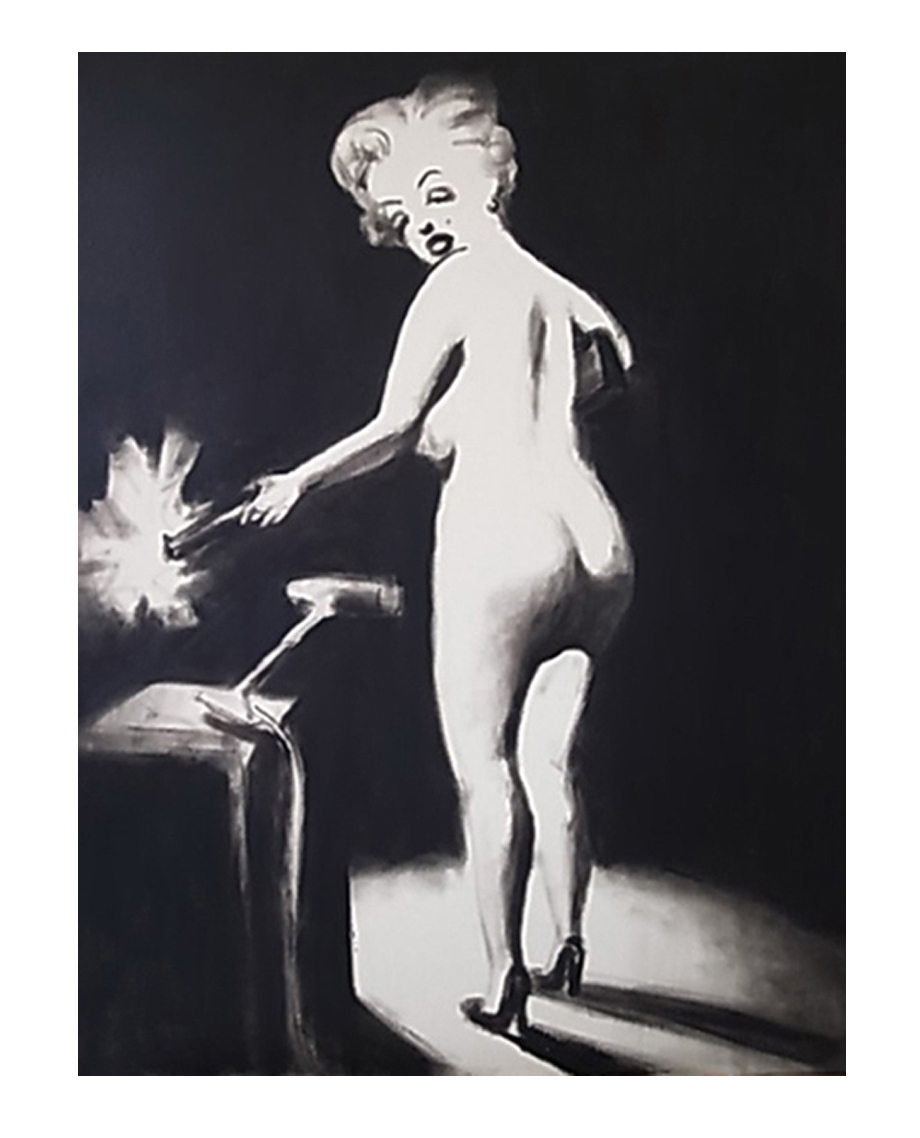 In [Happy Birthday to You], Monroe turns sideways and holds a rifle, shooting at the auditorium with her back facing the viewers, which seems to tell them that she is playing a sparkler. At the moment of firing, time stops elapsing and the microphone on the podium stays tilted in the air. The flare at the muzzle resembles carnival fireworks, accompanying Monroe’s face and adorable physique, making the scene nothing short of a game.

→go to m Works, Monroe Series 28 [Happy Birthday to you]

Monroe’s car zooms by from left to right at the beginning, and from right to left at the end, which represents departure and return. [00:02] depicts Monroe driving her car with the headlights turned on, implying that it is still before the crack of dawn. The tiny number of trees in the background suggests a desolate suburb. From [00:02] to [01:04], the compositions contain no other image than Monroe and her car. The continual zooming in demonstrates the process of departure. 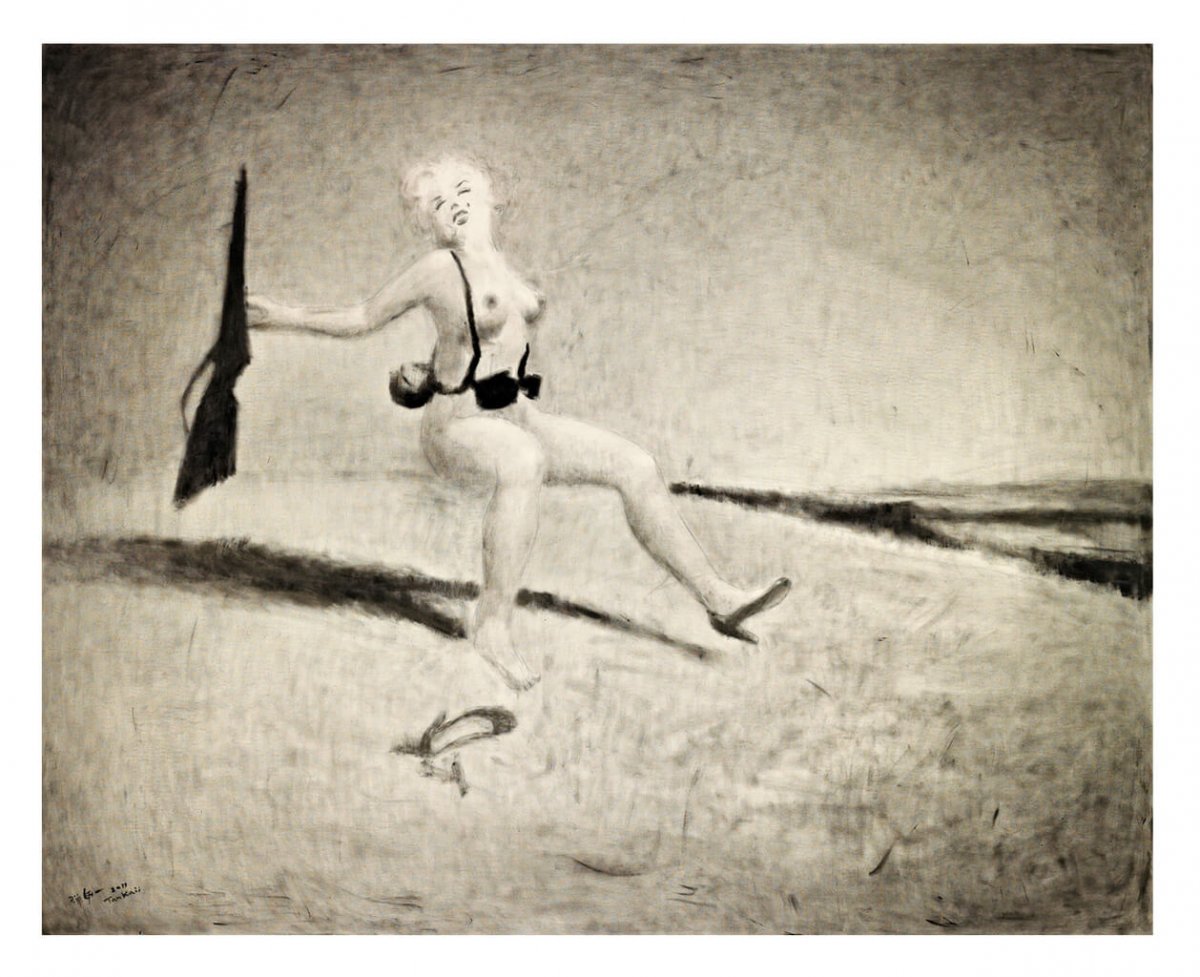 Tan created this work by reference to [The Falling Soldier], a famous photograph taken by Hungarian American war correspondent Robert Capa (1913-1954). This photo was believed to be taken during the Spanish civil war, capturing the very moment when a soldier was shot and falling.

In [Marilyn Monroe Joined the Spanish Civil War in 1936], Monroe is involved in the Spanish civil war without a reason. Her facial expression is reminiscent of [The Ecstasy of Saint Teresa] carved by Gian Lorenzo Bernini (1598-1680). In other words, her ambiguous facial expression shows not so much the pain of the falling soldier as the excitement and delight of profound perplexity. The soldier’s combat belt becomes a sexy and engrossing accessory on Monroe. From cruelty and pain to pleasure and sex appeal, everything appears grudgingly absurd. Monroe’s slightly backward figure turns into a radiant and alluring moment. 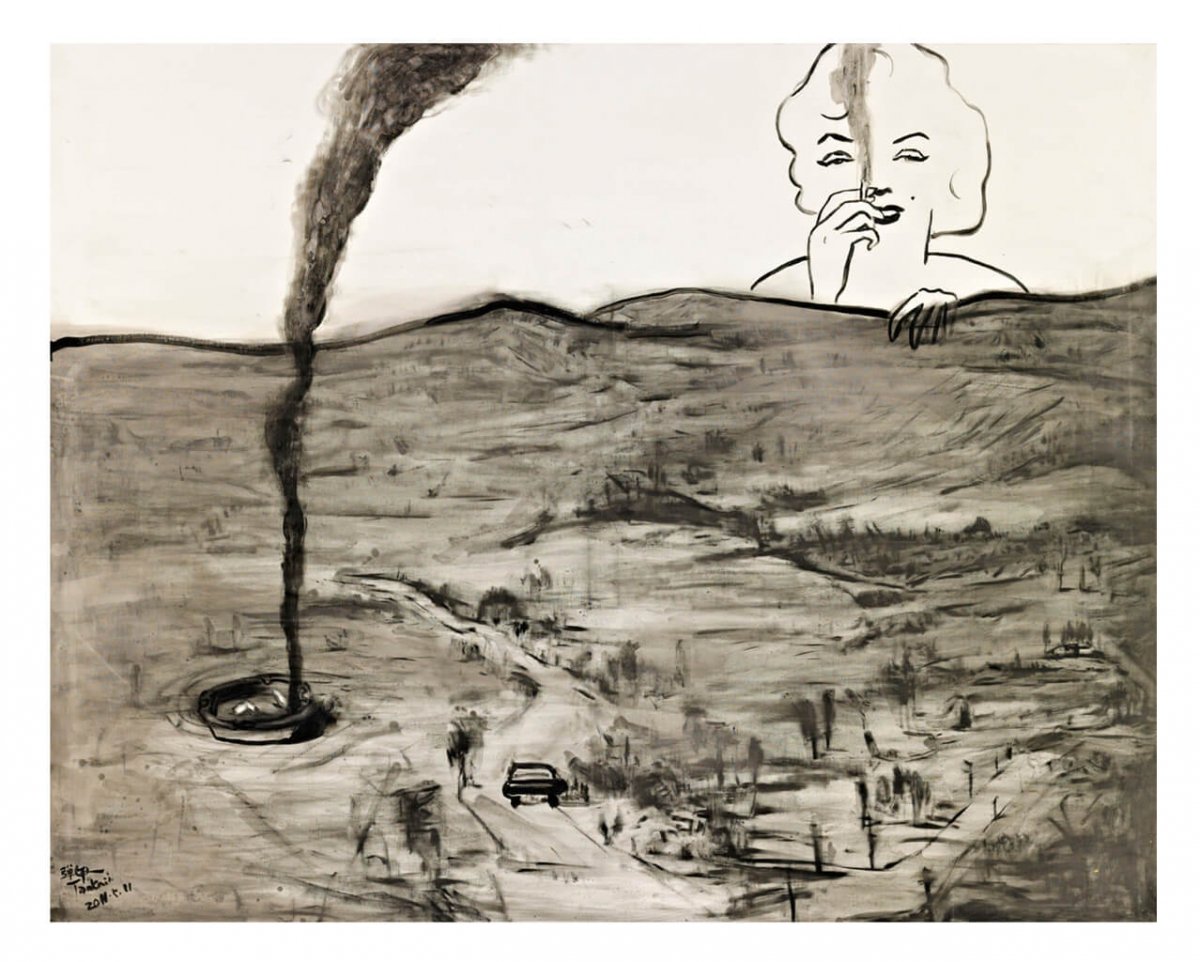 In [Giant Marilyn Monroe], a Pontiac races on the U.S. Route 51 surrounded by a barren land when Monroe appears in the background. Her sudden appearance interrupted this seemingly real scene, prompting us to wonder what the reality is.

On the roadside, the billows of smoke rise into the sky. Taking a closer look at it, we may find that the larger-than-the-car object from which the smoke rises is nothing but an ashtray that Monroe placed there conveniently when observing us out of sheer boredom.

It turns out that the world we take to be true is no more than a replica of "The Truman Show." Monroe is the God looking superciliously at human beings, making them feel dwarfed by it. 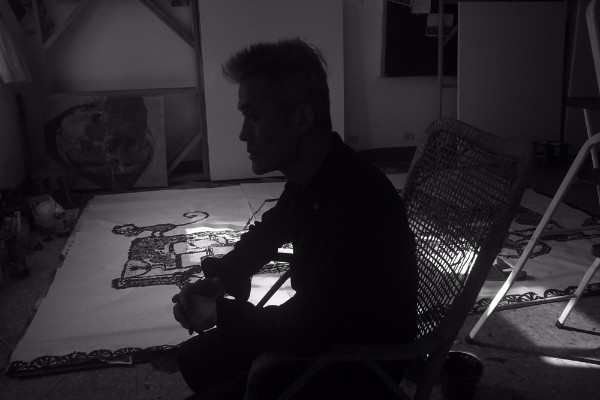 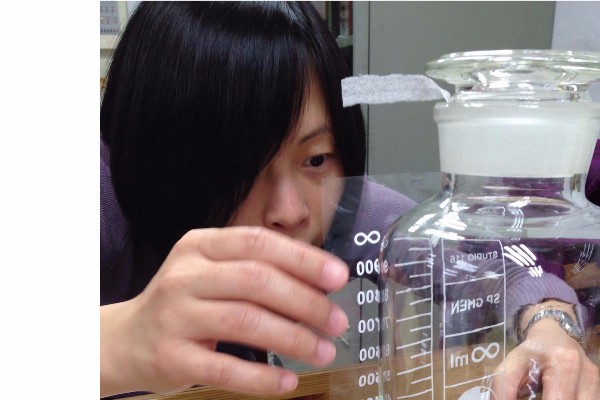